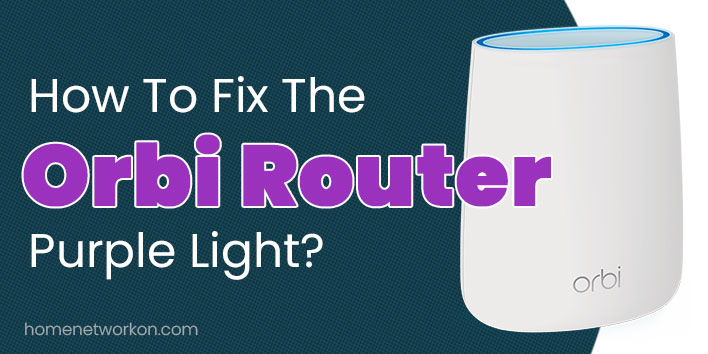 Both the Orbi router and its satellites have a LED light that indicates the network status and activity.

A purple (magenta) light on the Orbi router is a sign that it has problems connecting to the internet.

But if you see the purple (magenta) light on one of the satellites it is a sign that there is a problem in the synchronization between the router and the satellite.

When taking a look at the reasons for the purple or magenta light we need to see whether this light is on the router or the satellites.

The Router Can’t Connect To The Internet

In case you see the purple light on the Orbi router these are the possible reasons for that:

The Orbi Satellite and The Router Can’t Sync

How To Fix The Orbi Router Purple Light Issue?

If some of the tips presented here look too technical for you, please skip to the last step – Contact your ISP.

Check the WAN Cable and All Other Cables

We have already mentioned that one of the reasons why your Orbi router is showing the purple light is when the WAN connection is down.

So, let’s start with this one. Check the Ethernet cable going into the WAN port of the router. Is it properly connected? Does it sit firmly in the WAN port? You can try to pull it out gently, if it comes out then the connection is loose. Put it back in and make sure to hear a click when you do that. This means that it is connected firmly and properly.

Make sure to check the other end of this cable and all the other cables as well. Replace any damaged cables and connectors.

Hopefully, the Orbi router purple light error will be fixed.

This step is quick and easy, and on top of everything, it is pretty effective in fixing all kinds of networking issues.

This is going to clear any conflicts in the router software that may have caused the issue.

In case the power-cycling didn’t give any results and you are still seeing the Netgear Orbi router purple light, please restart your Orbi network. This will refresh the entire network but you need to make sure to do this in a specific sequence:

2. If it has a battery backup, remove the battery.

3. Unplug the modem from the power outlet.

5. Place the battery back into the modem.

6. Plug the modem in the power outlet

7. Turn on the modem. Wait till it boots up.

8. Turn on the router and wait till it boots up properly.

Sync your Orbi router and satellites

Check whether the router and the satellites are powered on.

Is Your ISP Down?

This may happen because your ISP has made some changes in the configuration, or they are doing some maintenance or are experiencing other problems.

To check whether your Internet Service Provider is down or you are having an outage in your area you can login to your ISP account or use their app on your smartphone. You will see an alert message if there is such a problem. Or you can check what’s going on by typing your ISP name on sites like downdetector.com where users report their problem with their ISP.

In case of a greater service outage you will have to be patient. Once they fix the issue the Orbi router purple light will disappear.

Sometimes an outdated firmware can be the reason for the Orbi magenta light. In order to fix this, you need to perform a Netgear Orbi firmware update.

Reset Your Orbi To Factory Settings

If you have tried everything and the Orbi router purple light issue is still there, our last option would be to reset the Orbi to factory defaults.

But read this first:

This step will delete all the custom settings like a WiFi name and password, guest networks, and so on. It will also un-sync the satellites and the Orbi router so you will have to sync them again.

The following video will show you how to reset your Orbi wireless router properly. After that, you will have to reconfigure the Orbi network. If you find this to be too technical for you, skip this step and contact support.

We hope that you have managed to fix the Orbi purple light error. However, if nothing has worked we recommend you to get in touch with your ISP support and tell them what the problem is. They can assist you in fixing the issue and even send a technician to check what’s going on.